Have You Seen Wanda? 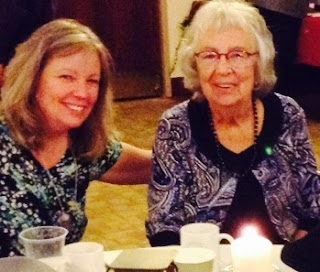 It was a peaceful evening. Lori's mother wanted liver, so Lori made her mother liver and onions for dinner. After dinner, the women had an evening of TV. They started out with a dose of "Wheel of Fortune," and ended up watching, "My 600 Pound Life."  "That's just terrible, just awful," said Lori's mother. "Yeah, it must be hard to walk around with all of that extra weight, "said Lori.  "I'm not talking about the fat guy," said Lori's mother with a disgusted tone in her voice. "I'm talking about his mother. Why does she keep feeding him french fries? It's all her fault he's fat!"  "I guess you're right ,Mom.  After-all, she's the one who's enabling him. Do you want me to turn the station? We could watch the Fido, network," said Lori. "No, I like this, keep it on."  One TV show led to another, soon it was 11PM, and Lori was exhausted. She hinted to her mother that maybe they both ought to retire, but Lori's mother wasn't taking the bait. "Mother, would you like me to turn out the lights for you?" "No, I'm going to stay up for awhile, I'm not tired."  As the theme song of ,"The Golden Girls was playing, (Thank you for Being a Friend), Lori left her mother, activated the alarm and turned off all of the lights in the house. As Lori walked further away from her mother's room, she was hardly able to hear the TV.  It was clear that Lori's mother had become more of a night owl than Lori could ever be.

At 3:30AM Lori's bedroom door swung open with enough speed to hit the wall. With all of the lights in the house on, and an urgency to find a long lost friend, Lori's mother's toothless face said, "Have you seen Wanda?  Is she in there? " Lori's mother briskly walked into Lori's bedroom where her husband was sleeping, and started raising her voice as if she was in a bar greeting a long lost friend,  " Wanda is that you?  Come out here, Wanda, right now!!" Lori immediately shifted into her Validation therapy mode by matching her mother's urgency. "When was the last time you saw Wanda, mother?" "She was standing beside me in my room and then she just disappeared!  Just like that, she was gone, and she is scared to death, she is running from them and doesn't want to get caught.  Is she here?"  Lori's mother than started walking down the hall in the direction of Lori's daughter's room. "Mother, if Wanda was last seen downstairs, maybe she is still there waiting for you. Should we try to look for her in the kitchen?" Lori's mother was then energized. "Good idea, Lori. Let's look in the kitchen!"  Then the two women ended up in the kitchen followed by the dining room, the laundry room and the living room. But no Wanda was seen anywhere. Lori then said, "So tell me about Wanda, mother.  Is she lost?"  "She is hiding and she doesn't want to be found, Lori. She is scared to death, because they want to take her and put her away because she can't remember things. "  Lori's mother was very animated and looked exhausted. "Are you hungry, mother?"  "Yes, Lori. I think I'd like some cereal." So Lori poured her mother some organic cereal and helped her mother by getting her some almond milk and a bowl and spoon.

"Mother, how did you find out about Wanda's fear of being found?"  Lori's mother was chewing her cereal and almost acted as if she didn't hear Lori, because it took her a long time to respond to Lori's questions. "I was sleeping, and I looked up and there was Wanda. She was standing over my bed." Lori said, "What was she wearing?" "She was wearing a long white gown, and she was so scared, because they had been chasing her, and she wanted me to help her." Lori's mother poured more milk in her bowl and acted more interested in her gluten free cinnamon cereal than the conversation. "I don't know where she went, but she was here just a minute ago, she was just here, Lori."  "I believe you mother," said Lori. Lori then, knowing that Wanda was her mother's own repressed fears being expressed, decided to give her mother a vote of confidence. "Hey mother, do you think you can do me a favor?"  Lori's mother was all ears, and suddenly wanted to hear what Lori was saying more than chewing her cereal. Lori's mother put down her spoon and wiped her mouth with a paper napkin. "Mother, when Wanda reappears, can you tell her that I will not let anyone take her away. Please tell her that we love her and we don't care if she is forgetful, if she has to wear depends, if she sleeps a lot or if she can't remember things. No one is going to put her away in a home no matter what happens, because this is her home, and we have plenty of room for her here. We really like Wanda and we like having her here with us.So, if Wanda wants to stay with us, she can. And no one can force her to leave to go anywhere, unless she wants to go. Okay???"

"Oh Lori, I think Wanda is going to be so happy to hear that."  Lori's mother then picked up the entire cereal bowl and started drinking the milk out of it, as if the bowl was a glass. (Something Lori's mother never did before she was diagnosed with dementia.) "Lori, what time is it?" (It was 4:15 AM)  "I am really tired, I need to go back to bed, goodnight."  "Goodnight mother, I love you," said Lori."I love you, too," said Lori's mother.

DISCLAIMER:  The information in this blog is information only for educational purposes. It is not meant to be a replacement for getting medical advice from your own health professional regarding your own individual health challenge or condition. It is advised that before starting an exercise program, or making dietary changes of any kind, to seek out the advise of your own individual health care provider first.  Dr. Denise will not diagnose, treat, or give direct personal consultations/advice to you on this blog for any medical condition, but will give general examples, and scientific research on many different health topics.  How you decide to use the information is between you and your own medical/ health professional.
By Unknown - April 25, 2016