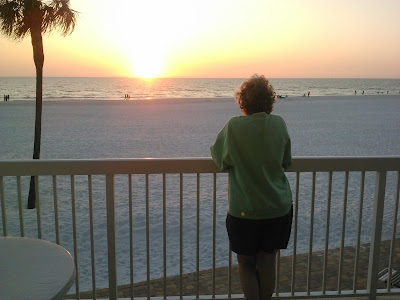 It was a combination of the changing of seasons and the settling of an estate. Lori's mother in law had passed on, and all of the contents in her house were arriving on a truck outside of Lori's mother's window. This left many questions for Lori's mother, and moments that Lori hadn't anticipated.

"Did she know?" Lori's mother would pass from room to room inspecting the new, very old furniture additions, and was trying out every chair, couch and bed that the movers had delivered, on every floor. "Did she know what, mother?" Lori was listening to her mother while she was putting folded clothes into her newly acquired chest of drawers. "Did she know that she was going to die?" Lori's mother asked the question while focusing her gaze out the window. "That's a great question Mom, worth pondering. I think she knew.  It's something we all think about, but becomes more of a common question we ask of ourselves when we age or when we are facing a serious illness, don't you agree?" "Oh, yes that is true. Ohhh yes." Lori's mother then stood up, walked into her grand daughters room and laid on her new/old bed. "This is a nice room. I'm going to like this very much and look at my new bed!" Lori's mother then laid down on her side with her head on the pillow and struck a glamour pose. Lori, without wanting to ruin her excitement didn't say a word, and continued down the hall into the other room. "Mom, " said Lori's daughter with a frantic tone. "How are you going to tell grandma that is not her room? She's napping in my bed with a smile on her face. I think she thinks MY room is HER room!" Give her some time, she will shift her attention to other things in a few minutes. Let her enjoy herself, honey. "I just don't want an old lady sleeping in my bed, Mom." "Show some respect, young lady, " said Lori. "An old lady who is now in heaven, (your other grandmother),  slept in that bed  for more than a few years, okay???" (Lori's daughter rolled her eyes, and tried not to show Lori her teen-aged disgust!!)

"Hey where did grandma go, now?" Lori's daughter couldn't believe how perked up her grandmother had become. They both found Lori's mother in the basement admiring the couch and lamps. "What do you think of my living room?" Lori's mother was so happy to see the furniture in place.  "I think that couch has "nap," written all over it!"  Lori's mother laid on the couch and was hugging the pillows. "This bed is smaller than the other bed," Lori's mother was comparing rooms. Lori noticed that a midst the chaos, her mother was putting things together more fluently than she would normally put things together on a daily basis. It was then that she thought that maybe very old people ( as Naomi Feil, MSW who is 86 herself, calls people over 80 with dementia), can become energized synaptically (directly influencing new thought patterns by new connections formed in their brains), by a break in routine. Too much rapid change appeared to cause confusion for Lori's mother.  But a slight change in routine could be stimulating,  forming new thought patterns, creating physical endurance. Her mother's reaction to the new furniture and observations of the movers, etc., almost made her appear to be without disability.

And then it happened. While Lori was cleaning boxes in her room, transferring journals, mementos, and special cards she had received from people in the past - she found a card with a puppy on the cover from her mother. It was filled with deep love and overflowing compassion, sent to Lori at very difficult time in her life.Probably the most painful emotional ordeal that Lori had ever gone through. The words were so comforting and inspired. Lori's mother spoke from her heart about how hard it is to watch someone who you love so much, experience so much suffering and pain in their lives. Especially when that someone is your child. Reading the letter brought Lori's mother back to her in an instant. The mother who loved her children more deeply than she loved life, and who was always there for Lori, her sisters, her friends, family and spouse though the thick and thin. ALWAYS there with a phonecall, a card, a hand, a hug, a hospital visit, ALWAYS there, loving and accepting everyone with overflowing empathy, acceptance, forgiveness and compassion. Truly a person who always listened on a deep, deep level to the needs and feelings of the person sitting in front of her.  And Lori couldn't help but think to herself after reading the letter "I miss you, I miss you so much mother! I miss you so much it hurts! It hurts so much I can hardly breathe sometimes!!"

This may sound strange to the reader, knowing that Lori is living with her mother, and seeing her every day. However,  the disease of dementia can can rob intimacy, and create levels of detachment. Lori's mother is no longer able to relate in the same way as she did in the past, regarding the initiation of supportive behaviors for others because she has lost so much of her short term memory. And so, Lori decided to cope with the detachment by using some of the things her mother as her role model taught her, throughout her life.

Lori's mother's greatest life lessons to share with her loved ones have been two things. After being married to a man with mental illness, she had to learn, 1) forgiveness and, 2) acceptance. Lori's mother always told her that the man, (Lori's father) that Lori knew growing up, was not the same man that she  had fallen in love with and married in the early 50's.  His illness took him from her. But she always told Lori, that there are blessings in everything, even when we can't see them. She would say, "If we have faith and can look up, God will show us miracles in everything, and love itself can heal anything, anyone and any situation." Lori has worked hard to forgive others, and to accept God's will which, (as hard as it can be),  includes watching her mother suffer from dementia.

So,  on days like the day Lori had recently, of  finding an old card from the past and thinking, "I miss you Mom." Lori's mother might also have moments of lucidity, when she realizes she can no longer be there in the same way she was in the past for herself, and for others- and may also think to herself, "I miss me , too."