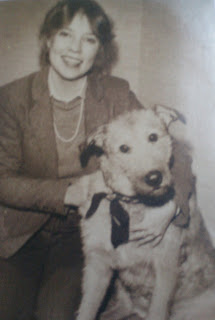 Lori was 23 years old, and had been training for a job that would give her opportunities to travel around the country with a Broadway show, and even have an opportunity to work on a movie. But her job was all resting upon one skill, and this skill was so important, that any alteration would not only cost Lori her job, but her future employers would lose and estimated 500K/night. As one of Lori's Broadway company managers once told her. "Shutting down the tour even for one night because of a dog issues could cost the company half a million dollars, so you have quite a responsibility on your hands young lady!!"

When opening week came around for this Tony winning Broadway musical, and they were putting the show in for the first stop on a 150 city tour, the dog Lori was working with refused to follow it's commands and cues from the actors on the stage. And opening night,  was now less than two days away!!  This was shocking to Lori, because the canine had performed these cues flawlessly for months leading up to the opening! Lori was concerned and even angry.  And all she could think about was, "the dog is being disobedient. " Lori was only looking at the behavior from her own perspective, and not from the dog's perspective. What was the REASON or the CAUSE for the behavior?

Then, - the genius of Lori's mentor, (a world famous dog trainer who now has his own TV show),  gave Lori some important pieces of wisdom. "Two things to remember: 1) There is always a reason for the behavior, and 2) Learn to follow non-verbal cues, be willing to be led and look at the situation through the dog's eyes, not yours." After careful investigation, looking at the challenge through the dog's eyes, it was found that the dog was used to taking less steps to get to her mark, center stage at her training stage on Broadway.  Once the steps were in place at the new theater, along with having tech people and the creative staff off of the stage during the scene, the dog performed beautifully.  Lori learned that the changes greatly affected the dog's ability to perform, thus causing behavioral changes.

The advice of Lori's mentor helped immensely, and these two pieces of information directly correlate to caring for a person who is living with dementia, with Lori adding one more piece of advice: Number 3 - "Don't take anything personally. It isn't about you, but solely about the person you are caring for so do what you can to get yourself out of the way. Once "I," is replaced with, "we," magic happens and you and your carer can meet someplace in-between where wisdom resides."

Being willing to be led without expectations will give you important cues regarding, "why," the person you are caring for is acting the way they are acting. Lori's mother has a history of being a secretary. Lori has found that if she doesn't straighten her mother's room up everyday putting everything in order in precisely the same place, everyday - her mother will start pacing and wringing her hands.  But when Lori stacks her mothers books in the corner, hangs up newly laundered clothes and makes sure her bed is made immediately after she wakes up with the pillows stacked a certain way, and with the curtains opened and tied, the pacing and hand wringing goes away.

Her mother is content, and talks about being home. She will say she is home and Lori will ask her where home is and she will always, every time say that she is in her childhood town at her grandparent's house where she was loved and adored as a child. With her mother sharing this information, Lori is then given direct feedback from her mother that she is happy and content.

(The above post is in memory of Roxanne, pictured above. Rescued from the ASPCA, Roxanne played "Sandy," in "Annie," did several TV commercials and "Shakespeare In The Park," in Central Park, NYC.)
Positive Communication methods for people living with dementia:  We recommend seminars by Teepa Snow,M.S., OTR/L.FAOTA www.teepasnow.com, Naomi Feil, MSW, www.vfvalidation.org, and her books, all of them. And the life changing, ground breaking books, "Contented Dementia," by Dr. Oliver James, "The Mindful Caregiver," by Nancy L. Kriseman, and "Deeper Into The Soul," by Nader Robert Shabahangi, Ph.D, and Bogna Szymkiewicz, Ph.D