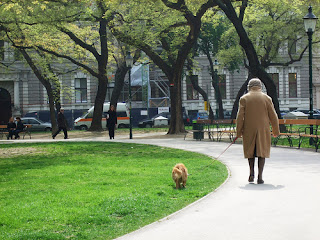 It was a small farm town, not more than an hour Northwest of Chicago. The train would make 4 stops a day, from cornfields, hog farms, and silos to the center of Michigan Avenue. And the sun, just eclipsing upon the tracks looked mysteriously shadowed by an early morning fog.  A junction town where the Illinois Central met the Aurora line bringing people from all over the world to settle down into a junction of cultures creating artists, farmers, bakers, businessmen and families of German immigrants. It is said that in the 1800's, Lincoln himself once stayed in one of the hotels,  along with a one time visit from a royal dignitary from Japan.

On the outskirts of town where the trellis supported the tracks was a high wooden platform overlooking acres of corn. Silhouetted under the sun,  bursting with excitement sacredly inhaling yellows, blues, pink pastels and dancing colors with each and every breath, stood an elderly woman with rosy cheeks shadowed on a leather leash by a three-legged dog. Her speech was fast, very fast almost as if her words had trouble catching up with her thoughts. But her wisdom came to life with a blank sheet of paper, and a paint brush, a crayon, a pencil and a pen. And her canvas was anything and everything. Because her eyes only saw the possibility of things. And so she walked picking up twigs, pine cones, rocks, old tin cans, bottle tops, and anything that sparkled.

Every morning she would walk, leaving her small apartment just at the crack of dawn. With her dog in tow she would talk carrying on conversations of long ago. "Peppy, " she would say to her dog - "When I was a little girl, I would play marbles over there in the school yard. Do you see that church over there? I was confirmed a Lutheran there. And Peppy, this alley was the alley behind Daddy's bakery where he would make fresh bread, and German cinnamon rolls."  Story upon story would be told to the dog, and other than being thought of as a little eccentric, this elder artist was looked upon with respect and understanding by everyone who knew her.

And then changes started happening. Her appearance changed and became less tidy.  Her pleasant personality had moments of paranoia. Her apartment and family house which she frequented often became a hoarder house filled with everything that she collected, including animal feces and urine from neglecting her duties as a pet owner. And then one day, her brother collapsed, and rather than calling someone for medical assistance, she lacked the presence of mind to care for him and he laid on the floor for three days without food or water."He's just taking a nap, nothing is wrong with him," she would say when the ambulance finally arrived.  (Her brother would have died on the floor had it not been for Lori's mother checking on him, and calling 911.)

After an evaluation,  this amazing and talented woman, Lori's Aunt Carol,  was diagnosed with Alzheimer's Disease and lived out the rest of her life in a nursing home.  Because of the care she received, Lori's Aunt Carol believed she was visiting a resort.  The nursing home had a particular section for Memory Care, and most of the staff had been trained in positive communication techniques. This made Aunt Carol very happy. "We play cards, get our hair done, go to music and art class and have someone who cooks for us every day.  This is a swell place," she would say.

Lori's Aunt Carol lived a very long life well into her upper 90's. She retained much of her cognitive capacities through excellent care, quietly passing away in a nursing home by the train tracks as the sun came up, in the junction town of her birth.  Aunt Carol's secret to happiness and longevity will always be her legacy of  living in the moment, and seeing beautiful colors, sparkles, lines and artistic promise everywhere!!!