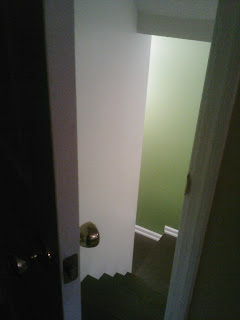 It was a rough night, and Lori couldn't sleep.  She was given some bad news by learning that a very close friend had been hospitalized, and was struggling to recover from a life threatening disease.  With so many thoughts racing through Lori's mind, she found herself tossing and turning, and needing of a cup of herbal tea.

The living room was dark, but as Lori approached the kitchen, she noticed that the basement door was wide open and the light was on. Within seconds Lori heard a woman's voice, "Is that you, Lori? What are you doing up?" It was Lori's mother walking up the steps from the basement to the kitchen at 3:45 in the morning!

"I'm afraid I have some very bad news, some very bad news Lori about your father." "Mother what were you doing in the basement?"  Lori's mother looked wide awake and vibrant when she answered her. "Well, I just wanted to see if anyone was down there, said Lori's mother. "Well, how long were you down there, mother?"  "Oh, I don't know Lori, it could have been a little while, but you know my mother is going to be in a state of shock when she finds out what my father is going to tell her.  It's awful, just awful.  And Leo's family is going to have a rough go of it, too." (Lori didn't have a clue of who Leo was, or is!)  "I tell you ,it's just terrible!"  Lori's mother was on a roll. She was animated like an excited child explaining something profound, and reflective, but Lori (although entertained by her animation),  was having a challenge keeping up with her.

Lori's mother walked over to the refrigerator, "Oh Lori, that amazing husband of yours has made us a pie, would you like some pie?" (Little did Lori's mother know, was that Lori's husband purposely made the organic apple pie without sugar, and placed it in the front of the refrigerator, fully visible so that when his mother- in- law would have her very predictable midnight snack wanderings, she would get a dose of healthy gluten free, sugar free pie, rather than sugar-ridden, lard ridden traditional unhealthy apple pie). "This is delicious pie, you ought to have some, Lori."

Lori and her entire family prepare for Lori's mother's wandering,  by wander proofing the house. Security safeguards are in place, so that her mother cannot leave the house by walking outside in the middle of the night, while everyone is sleeping.  Having security safeguards in place at night, gives Lori's mother the freedom to wander around the house at night, which only happens occasionally, by the way.  And Lori's mother enjoys getting up at night to read, to wander, or to find snacks in the fridge. This makes her happy, and tires her out so that she eventually puts herself back to bed.

So, as Lori's mother sat comfortably eating pie, drinking milk and eating peanut butter crackers (also of the organic health variety), she launched into her story."Dad was just here, and he was very sad.  He said someone walked in and told him and Leo, the manager of the market by the fire station downtown,  that Kroger was closing and that he would soon be out of a job!"  "That sounds terrible, Mom!  What is he going to do?" Lori was matching her mother's animation while she brewed her herbal tea. Then she used validating questions with her mother that she learned from taking Naomi Feil's Validation Therapy seminar. (Ie: "Who, What, When and How - excluding the question Why?) "How did you find out about this, mother?"  "Well," said Lori's mother, " Dad was just here, but he had to go.  He told me himself ." (Lori's grandfather died over 50 years ago.) Lori then said, "What did he say, mother?" "Well, he said he couldn't believe it!  He just couldn't believe that someone could walk into a place and shut it down, putting people out of work like that. But, you know, my Dad is a good meat man, and has a good reputation, so he will find something." "Well, that sounds like maybe things will eventually work out for him. Does anyone else know about this?" And then a very secretive animated face came over Lori's mother. "Oh golly, my mother is going to really be upset, I think I will give her a few days to cool down before going over there. She will be calling me soon on the phone, I just know it. And the entire town is going to be in shock when they hear about Kroger closing. Everyone is going to be in shock!"  Lori's mother was shaking her head, and truly enjoying the drama of telling the story with each nibble of her apple pie.

Then, after eating pie and crackers, and downing 2 glasses of milk, Lori's mother started yawning. "Well, it looks like I better get back to bed.  I'll call my mother in the morning!" ( Lori's grandmother passed away over 30 years ago.) Lori's mother,  in her sandpaper slippers, unevenly buttoned robe with a lateral bend, shuffled off to bed. "See you in the morning, Lori."  "Okay, mother - see you in the morning."

Lori grinned and happily reflected upon what a blessing it is to have her mother near. "I love you mother, sleep well now," said Lori.  "Oh,  you know I will, I always sleep well.  Good night, Lori" And after Lori straighten up the kitchen and had her second cup of tea, the sun came up, and she finally went to sleep.


Positive Communication methods for people living with dementia:  We recommend seminars by Teepa Snow,M.S., OTR/L.FAOTA www.teepasnow.com, Naomi Feil, MSW, www.vfvalidation.org, and her books, all of them. And the life changing, ground breaking book, "Contented Dementia," by Dr. Oliver James

The information in this blog is information. It is not meant to be a replacement for getting medical advice from your own health professional regarding your own individual health challenge or condition. Dr. Denise will not diagnose, treat, or give direct personal consultations/advice to you on this blog for any medical condition, but will give general examples, and scientific research on many different health topics.  How you decide to use the information is between you and your own medical/ health professional.
By Unknown - July 06, 2015