Where Is The Vicks? 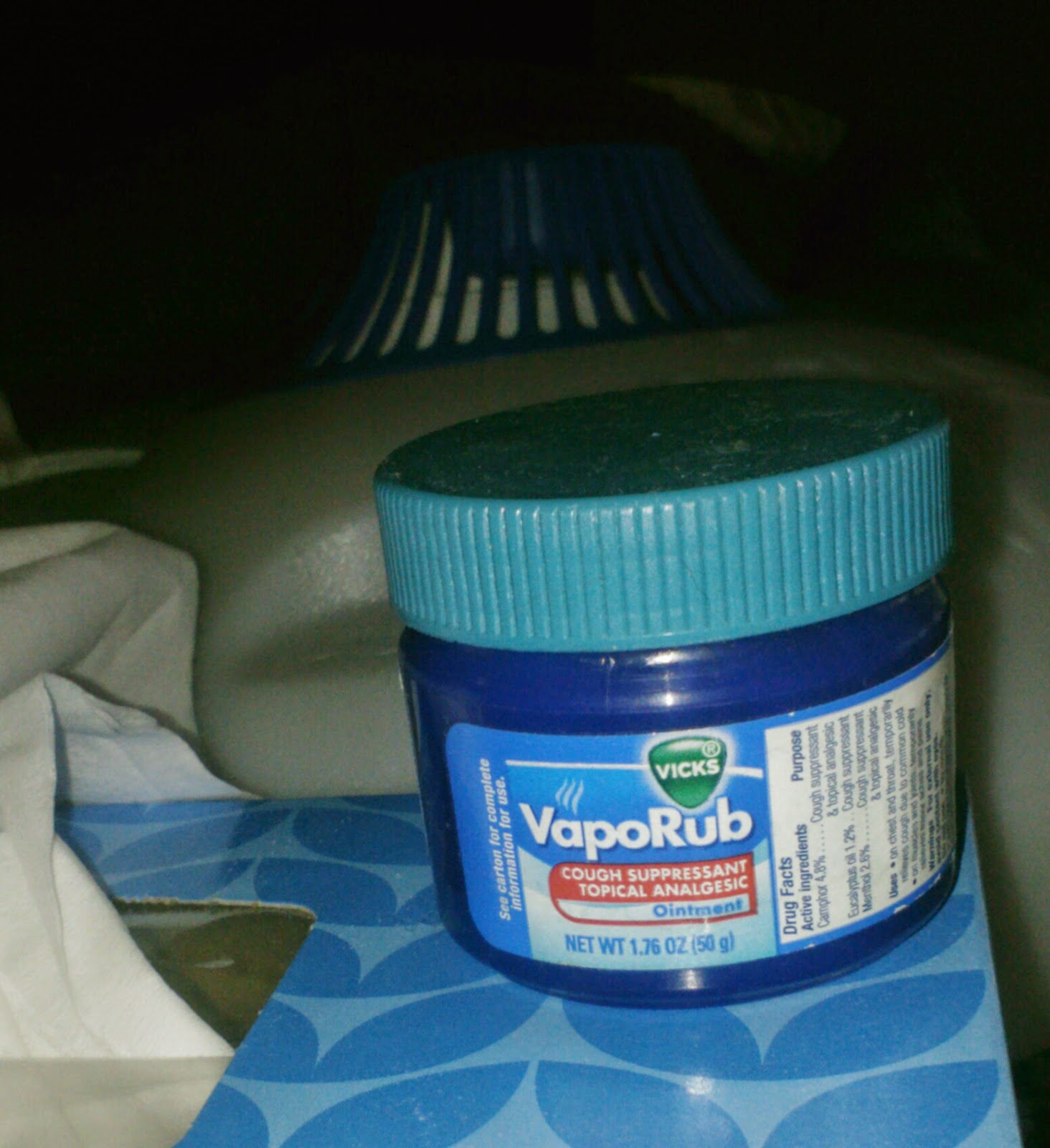 Lori did not feel well, and was fading. The holiday season, along with hosting her daughter's Christmas party, car pooling, shopping, church activities, musical activities and care giving activities were exhausting her.  All of Lori's joints hurt, her throat was sore, and she had the chills.  Lori cleaned the house, made meals for her mother, drove her mother to appointments and was convinced she was coming down with something. So she upped her vitamin C, and took some healing herbs, a chiropractic adjustment and a much needed nap. With little warning,  Lori had a cough, and it wasn't just a quiet productive cough, but a violent, non-stop dry cough. Lori was coughing all night, and Lori's mother was worried.

Lori needed sleep, but was not sleeping. She would go to bed at 8PM, then at 1AM, all the lights in the house would be turned on, followed by shuffling feet and mumbling. Lori's bedroom door would fly open, followed by her toothless mother wearing unmatched socks, tasseled hair, and an over sized robe "Where is the Vicks?" Lori, you need Vicks so I'm taking the car to the drugstore. We need to get you well, now where are the car keys?" Lori would get up with her mother who already had gone into her grand daughter's room looking for Vicks. All of the cupboards in the kitchen were opened looking for Vicks, the medicine cabinets in all of the bathrooms, and even the kitchen drawers had been prodded for Vicks. "You need Vicks and a vaporizer, Lori." Lori would calm her mother down, and would close all of the cupboards, and would turn off all of the lights. Her mother would finally settle down, and with all of the lights off, Lori would go back to bed. Then at 3AM, all of the lights would go on followed by shuffling feet and mumbling. Reminiscent of the movie, "Groundhogs Day" where the same scene is repeated over and over again,  Lori's bedroom door would fly open, "Where is the Vicks?  Lori, you need Vicks." The same scenario would play over and over again every few hours. The first night, Lori's mother woke her up 3 times. The second night, 4 times, and by the third night, Lori was fearful of developing walking pneumonia, or even death (okay, a slight exaggeration) from lack of sleep, and ended up seeing her doctor. Lori was afraid that her mother would get sick, too from sleep deprivation.

Experts on communication techniques regarding dementia (Naomi Feil, MSW), say that all behavior has meaning behind it. Lori had a history of having pneumonia as a young child where her mother would stay up all night with her slathering her chest with Vicks and rocking her to sleep next to a vaporizer. So, Lori was not offended by the interruptions that happened in the middle of the night, because she admitted that she herself was guilty of waking up the entire house with her non-stop coughing. "That's it, Lori." Her mother said on night three. We are not only getting you Vicks, but you are going to see a doctor tomorrow. Bronchitis can easily turn into pneumonia, Lori."  Her toothless mother at 3 AM was making a lot of sense. No one would even guess she had dementia with those comments, and then as always with dementia - there is one thing said, that gives it away and this is what Lori's mother said: "And tomorrow we will call your Uncle Ron, and he will see you immediately. He always enjoys seeing you Lori." Lori's Uncle Ron was a medical doctor, and he and Lori had a very close bond. But Uncle Ron was dead.  He died 10 years ago, and lived in another state. "Okay mother, I will see the doctor tomorrow, I promise."

So, Lori saw the doctor, and the medical staff admitted that antibiotics would not work for what appeared to be a virus, and that the flu shot that had been advertised non-stop on the radio, according to the medical staff, was not appearing to stop the flu strain in our town!!  So, since Lori was not a fan of drugs anyway - she agreed to take a strong cough suppressant as needed at night to help her and the entire house to sleep, to sanitize everything, to wash her hands and to follow her mother's advice by going to the drugstore and purchasing a vaporizer and 2 large jars of Vicks!!!

When the care giver needs a care giver, it can sometimes be, the care giver's mom!!!  And what was interesting to notice, was without Lori's interaction (when Lori was laid up for 6 days), Lori's mother would appear to be in her own silent world. When Lori started feeling better, Lori's mothers energy level seemed to improve too, and the staring into space, ended. Lori's mother initiated more activities on her own. She would invite her grand daughter to play marbles on the living room floor, she would play with the dog, would write in her journal, would watch football games and liked to play Sudoku.

As they say in many books, and philosophies, “You can’t go back in time.” And so the fact remains, “What is, and what will be, will be.”  However, during the holidays, namely Christmas, which Lori’s mother has always celebrated, the past becomes once again explored.  And how does this happen, one would ask?  Very simply. Great moments that have been recorded in her mother’s past memory, become re-ignited by holiday traditions.
So, by putting up the tree, and bringing out the decorations from the basement, Lori’s mother once again in her mind goes back to 1943.  Every explanation goes back to the same story of her German grandmother’s cookies, and her mother’s cherry pie. She sees her father sitting by the radio in the living room in his favorite high back corner chair drinking beer and listening to Glenn Miller  And in quiet reflection, she turns to Lori and says, “I don’t know why we don’t go back there anymore.”  “I wonder if they put the tree up, or if they will be getting snow?”  Lori listens, and then asks questions. “What is your favorite memory of Christmas?”  Lori’s mother has a thoughtful grin on her face, and says, “I don’t know, I guess just spending time with my parents.  I miss them most around the holidays, especially Christmas. “Then her mother says, “And there was a time when we didn’t go down South to see the relatives. I so wanted to see my grandparents, but halfway down the highway, my father turned the car around, and we went back home.”  Lori was curious, saying. “Why did you not see the relatives that year?”  Her mother said, “We had a lot of snow, and the flurries got worse with each mile we drove.  We had no choice but to turn around and go home.  I hated missing my cousins that year, but my father said it was too dangerous to travel.”  “So, what did you end up doing, mom?” Lori wanted to listen, and with each story, she would learn more and more about her mother’s past.  “Well, Lori,” her mother scratched her head, and looked up at the ceiling. “We just had a quiet Christmas at home, I guess. Of course, my mother always made pies for the holiday dinners with the relatives, so we must have eaten plenty of cherry pie. We didn’t have much money Lori, but we had love in the home, and a hot meal on the table. And you know more than anyone else, Lori how well your grandmother could make baked chicken and mashed potatoes!”
.
Vivid pictures, like movies run through the minds of people with dementia every day.  Many times, people observing the behaviors of people with dementia observe actions that appear to be disconnected from reality, and present time consciousness.  In a workshop that I recently attended in Atlanta last month,  the originator of Validation, Naomi Feil, MSW described the behavior of a very old man who would constantly insist on laying supine (belly up), underneath his bed.  No one could understand why this man was constantly found under his bed “belly up.”  Every day, this man insisted on laying “belly up,” under his bed for hours.  Most people would think the man had gone, “mad,” or that he was experiencing “hardening of the arteries.”  However, someone using Validation, as taught by Naomi Feil, MSW would take the time to study the man’s history. His past medical history along with his family history, occupational history and social history. And the conclusion of the discovery of one’s past history always, (in every case), leads to greater understanding. We need to truly connect with people suffering from dementia, and one way to do this is to realize that everything, (every action), has meaning.  And every thought and action is anchored in the past.  Through exploration of the man in the above example’s past, and thorough assessment of his history, it was apparent  that this same man, oftentimes  misunderstood by his habit of laying “belly up,” under his bed every day,  for over 40 years had a history of working as a car mechanic!  And what do car mechanics do every day? They spend a great majority of their time laying, “belly up,” under cars! So, with Christmas and other holiday traditions come memories.  And one way to connect on a deeper level with our loved one’s suffering from dementia over the holidays, is to ask questions. According to Validation, questions that we ask can bring us closer to greater understanding. Lori found out from her mother that she is highly attached to sensations connected to Christmas memories. The sense of smell is her most prominent sensory memory. Her mother would often describe her experience from 1943 by using sensory terms, ( Ie: “Her grandmother’s baked goods, her mother’s cherry pies, her grandfather’s apple strudel, the turkey dinners,” etc. )  So, Lori is planning on making a turkey dinner for Christmas with (you guessed it), cherry pies and apple strudel. The German Christmas songs will be sung around the tree, bringing the past to the present, and connecting on a deep level with family traditions to make for a memorable celebration. And, even if Lori’s mother forgets the celebration on the next day, she will once again feel the nurturance and love that she experienced as a child in 1943. And Lori will connect on an even deeper level with her mother through song, good food and joyous family connections.

May the joy and light of the holidays bless the world with peace, unconditional love and understanding!!!
By Unknown - December 17, 2014 No comments: Links to this post