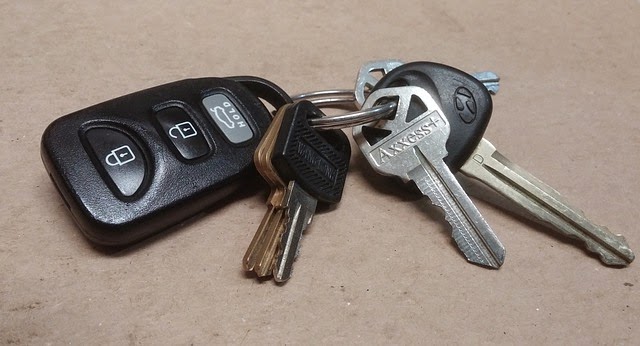 It had been a long day. Lori was very sad  after receiving news about a family friend who was struggling to stay alive after being hospitalized. Her focus on her daily activities had been thwarted by this news and she was thrown off of her care giving routine.

By 8PM, Lori was in her mother's room watching a home improvement show, and woke herself up with her own snoring. She quickly remembered to give her mother her evening medications, tucked her mother in, and then decided to go to bed, herself. "Good night mother, I love you, " said Lori to her mother. "I love you, too Lori, " said her mother. Lights were turned off, and Lori went to bed.

Then it happened. It was 5:30AM, and Lori heard the sound of the front door opening and closing with a "CRASH."  Lori's husband slept through this, and Lori noticed that her dog was still asleep on her daughter's bed. "MOTHER!" Lori thought as she ran into her mother's room.  Her mother was gone and the sound of the engine turning with a loud "VAROOM," sound was heard coming from the driveway. Lori realized that in her exhausted state of mind the night before,  that she had mistakenly turned in before hiding her car keys!!

Lori flew out of her house, just in time to open the passenger door of her car. And there sitting with the determination of a WWII fighter pilot was Lori's mother, "I've gotta go now Lori, before they find me.  They're after me and they WILL FIND ME and force me to go back with them. I need to go NOW!"  "I don't know why so many people are after me, or what I ever did to deserve this, but they are on their way, and I am NOT going to let them catch me!"  Lori was just flabbergasted, but had to think of something to say, and it had to be something that would re-direct her mother. But first she had to validate where her mother was at in the moment.

Lori was reading a book by Naomi Feil, MSW on communication techniques to avoid caregiver burnout and to handle agitation and wandering in people with dementia called, "The Validation Breakthrough," which gives simple techniques of how to communicate with people with Alzheimer's and dementia -like symptoms. Lori thought on her feet and said, "Mom, this sounds serious. Let's go inside where it is safe, so we can come up with a plan." Lori's mother immediately turned off the car and gave Lori the keys. "But we need to get away NOW Lori, NOW!!!  They WILL find us." Lori matched her mother's emotional intensity and said, "Well, let's go inside so we can be safe, NOW!  Right NOW okay? Come on mom, follow me!!" Lori's mother looked around, and with the grace of a dancer, moved quickly, and followed Lori's every step.

Lori and her mother went back into Lori's house, and after moments of of pacing back and forth in the living room, Lori's mother decided to join Lori for hot chocolate in the kitchen.  "Who are we running from, mom?" Lori's mother was very frightened and confused and while she stirred her hot chocolate said, (looking around, so no one else would hear),   "My cousin and his friends, and they won't give up, Lori until they find me!"  Lori was concerned about her mother's heart which was weak, and her cardiac condition which could worsen under stress, so she tried to keep her calm. Validation has many phases which Lori was just learning, but she remembered to ask her mother "Who, What, Where and How," questions along with prepositions and numbers which she learned from studying Validation techniques.

"Where were they going to get you?" "Outside, Lori." "Well, mother, it is good that we are inside now, isn't it?" Lori's mother looked puzzled, but then after pausing answered, "You are right , Lori." "Mom, what did they look like?" "They looked just like monsters, Lori. They had monster faces and human bodies."   "That sounds scary, mother. How many were they?" Lori, there were two of them," "Could you check the doors, Lori?"  "Would you like me to check the doors to make sure they are locked?" "Could you, Lori?" "I will, mother." And as Lori got up from her chair to check the front and back door, Lori's mother also requested the family dog. Lori said, " I will also get the dog and have her come downstairs so she can sit with you." Her mother said, 'I always feel safe with the dog." Her mother patted the dog on the head while the dog wagged her tail, leaning against Lori's mother's frame. "We are going to be okay," she said to the dog. "We don't have to worry at all, because we have eachother, okay?" Her mother put her eyes directly in front of the dog's eyes, and gradually looked more relaxed. After checking the locks, Lori told her mother that the police patrol the area every few hours.

Her mother then took a deep breath and relaxed even more.  "I don't know why people want to come and get me, or what I have done." "Mom, did you do something that would make somebody want to come and get you?" Lori's mother said, "No, I can't think of a thing that I could have done." "Well, mom I don't think you did anything either, but I know for sure that no one can make you go anywhere with them, unless you choose to go. Do you want to go somewhere?" "No Lori,  I am getting tired now and think I will go to bed.  I must have had a bad dream." Lori's mother started yawning. "Mom, you are safe here with us, and we will always make sure that you are safe.  How do you feel now?"  "I would like to go back to bed Lori,  because I am so tired, but I am not going to take off my sneakers, Lori.  Lori's mother nodded her head, said a prayer and with her shoes on, put her covers on over her sneakers and quickly fell asleep.

Lori learned some important lessons. Firstly, to not let fatigue cause her to forget to hide the car keys!!  Secondly, to always be prepared to handle unexpected behaviors and confusion of her mother's dementia by knowing how to ask the right questions. Lori's knowledge of a few simple questions from Naomi Feil's book,  "The Validation Breakthough," validated her mother's feelings, and offered comfort, lessened anxiety and redirection for a safe outcome, and a restful sleep.

For more information on, "Validation," and the Validation Training Institute, go to: www.vfvalidation.org