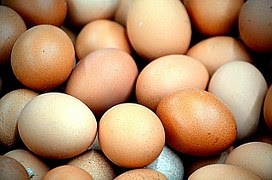 Lori had been warned several times before having her mother move in with her to always hide the eggs if she had to leave the house.  Her mother loved to cook and eat eggs, and appeared to have not forgotten her favorite habit.  It didn't matter if they were fried, scrambled or poached, the routine was always the same. She would shuffle out of her bedroom in her robe, with her hair tastled, unmatched socks and slippers on and her teeth would be soaking in a Listerine- filled Tupperware container by the bathroom sink. It was hard to predict where or when she would get her craving for eggs.  Sometimes it would happen at 3:30AM. and other times would be after a long nap, or even a desire to have eggs for a late morning second breakfast, because she would forget that she had already eaten once before in the first place.

The fact that she liked eggs wasn't the problem, especially now since research is pointing to the health benefits rather than the risks of eating eggs. However, the problem was having her making eggs in the house when no one else was home, and forgetting to turn off the gas stove!!!  And, " knock on wood," that scenario hadn't happened yet, but could happen.  So, what was done was something everyone must do, because safety and peace of mind for both Lori and her mother were at stake.

When I was a first time mother of an infant, I maintained my peace of mind through preparation. And the mantra was always the same, "Prepare for the worse, but expect the best."  If I had to go anywhere I would not only fill the diaper bag with everything I needed, (extras included.)  But I would have a snack bag full of easy to get to and eat goodies.  I would also pack extra drinks, and snacks for me, too.  Yes, I became a pack rat, but the truth is that I rarely got stuck in a situation that would lead to unnecessary risks or anxiety ridden exchanges.

The same philosophy was adopted by Lori when she became her mother's carepartner. Lori had a strategy which worked well in her household to prevent disasters from happening at her house in her absence by her mother who suffered from dementia, and loved to make eggs.   Her strategy involved, "hiding the eggs, " only when she was not at home to supervise her mother in the kitchen. And the supervision was a very subtle supervision, because Lori's mother's dignity was at stake, too. So, Lori would quietly supervise by just being close enough to observe the egg making process as a silent safety inspector. This took some practice, because Lori's mother did not like being pampered, or nurtured. She was very aware of Lori trying to help her walk up steps, etc. So, Lori would bite her tongue, and not react when her mother would pour too much olive oil in the frying pan, or would have the flame up higher than Lori would choose to have the flame.  Her mother enjoyed the independence of being able to make eggs, all by herself. She also enjoyed making her own bed, and feeding the dog.  So, all of these activities were extremely important for her mother's self esteem.

However, since her mother had dementia, her mother's actions regarding the performance of the domestic activities were "out of sync" with how someone without dementia would perform the activity. As a caregiver/care-partner to her mother, Lori decided to forgo her ideas of "how" things would normally be done. It was more important for her to honor her mother's desire for independence, giving her mother  opportunities to embrace self reliance. She did this in much the same way, as she raised her child.

When her daughter was two, and made her bed the wrong way, she would praise her daughter's efforts, rather than correcting her young daughter's techniques. So, if the bed was lumpy when her mother made it, it was lumpy, and that was okay. At times, Lori's mother would question why the bed was lumpy, and then after questioning the lumpiness of the bed, after her mother would leave the room, Lori would remake the bed.  If Lori made the bed after her mother made it (but was complaining of having a lumpy bed that she herself had forgotten about creating) , and it looked perfect after Lori (unknowingly to her mother) would smooth out the lumps, her mother (in her forgetting) would say, "See how nice my bed and my room look today, Lori." And Lori would say, "Mom, you really know how to make your room look cozy."

Lori's mother thought she herself had made the bed, and would then sit with a look of confidence and accomplishment.  She would not remember Lori vacuuming the room, or tweaking the pillows on the bed, she would only remember that she was directly involved in cleaning the room and would take all the credit for the room's tidy appearance. Lori would never lie directly to her mother about anything, but making the bed look nice for her after she  requested a lump free bed, was a way of honoring her request for tidiness.

A decision was made by Lori and her family at the onset,  when her mother started showing signs of dementia to do all that could be done to preserve her mother's dignity, and to create a "happy bubble" of existence for her. Going with her into her reality, by meeting her at the bridge from past to present was one method that Lori used to communicate with her mother.  And following her mother's lead was another way to connect with her mother.

And how did Lori learn so much about a mother's love? From her mother!!  It was her mother who cared for Lori's grandmother through all of the stages of Alzheimer's Disease, and she never complained. She served her mother with non-judgement, active listening, a willingness to be led, a joyful spirit and with unconditional love. 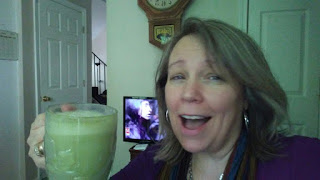